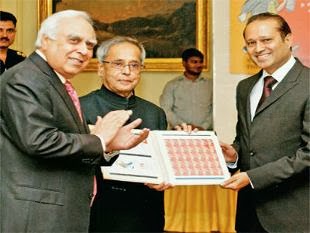 NEW DELHI: President Pranab Mukherjee released a postal stamp to commemorate the 175th anniversary of The Times of India in an elegant ceremony at the Rashtrapati Bhawan, recalling the momentous history of the newspaper that has witnessed and reported the events that shaped modern India for the better part of two centuries.

http://economictimes.indiatimes.com/news/news-by-industry/et-cetera/president-pranab-mukherjee-releases-stamp-to-mark-175-years-of-the-times-of-india/articleshow/25722412.cms
Posted by Unknown at 23:34